On 29 September, Armando Soldaini receives the Great Wall Friendship Award.
The awards ceremony was held as part of the celebrations organized for the recurrence of the foundation of the PRC on October 1.
The award is given every three years to the foreign consultant who has contributed to the development of the city of Beijing. The awards were presented to:

For the first time, an Italian was awarded the important recognition. This is recognized as the “official friend of the city” with the consequent automatic green card right and the status of honorary citizen of the Chinese capital.
The award ceremony was followed by a banquet attended by Chinese winners and dignitaries. 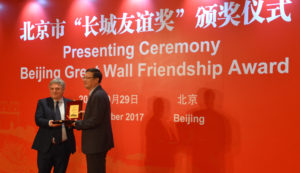